From Woozle Writes Code
Jump to navigation Jump to search

I actually worked for Carrier twice: once as a full-time contractor for about two years, and the other on a more project-oriented basis a few years later.

The first project I worked on at Carrier was the "Shipping Calendar" application; I was heavily involved in the design and documentation phases, and wrote most of the code. 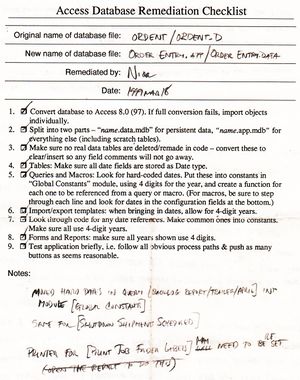 the checklist I created and used for ensuring that all Access applications were properly remediated, filled out for the "Order Entry" application (with additional notes)

The major project which occupied the majority of my time there was y2k remediation; this project was completed over several months, quietly and on schedule, by basically two people (Ed and myself), with some help from the PHP-11 support people in Syracuse. There were no unfortunate date-related incidents in any of the software within our purview.

Another project which emerged from the y2k remediation involved bridging Windows-based database software (upon which front-office operations were increasingly dependent) with the older DEC PDP-11 business system running "ManMan"; this too was completed in short order. It was still in use during my second (brief) stint at Carrier a couple of years later.

My work there only came to an end when upper management abruptly issued a directive to terminate all contractors, throughout the company, without warning. My supervisor (Ed) was not happy with this. Circumstantial evidence points to the likelihood that they were falling short on their quarterly projections, and needed to quickly cut some costs (even at the risk of long-term health) in order to look good for the stockholders.

This itself came in two parts. First, I handled the IT help desk on site for a week so Ed could take a long-needed vacation. After that, I did a little VB work remotely (from Durham) designing a new subsystem for (I think) the ManMan queue-handler.

For the second time, upper management put the kibosh on this work by terminating all contractors without notice.